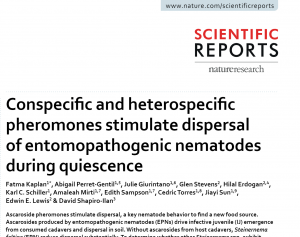 DAVIS, CA, UNITED STATES, March 31, 2020 — Pheronym, an ag-biotech pest control company, announced today the results of their third peer-reviewed study demonstrating the efficacy of their patented Nematism ™ pheromone extract for bio-remediation of agricultural pests.   In a study to be published in Scientific Reports by Springer Nature, Dr. David Shapiro-Ilan with the USDA-ARS, Dr. Ed Lewis, with the University of Idaho, and Dr. Fatma Kaplan, with Pheronym reported that nematodes treated with Pheronym’s pheromones still aggressively dispersed in temperatures as low as 15 degrees Celsius, which was superior to untreated nematodes. Most entomopathogenic (insect-killing) nematode species require 20 degrees or above for optimum activity. 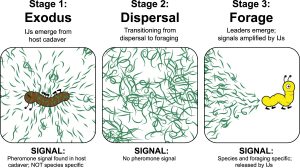 The research, led by Dr. Kaplan with Pheronym, Inc., studied pheromones’ role in the stimulation of dispersal at temperatures from 15 to 30 degrees Celsius and how this is affected by nematodes’ foraging strategy.

The new study can be found here www.nature.com/articles.