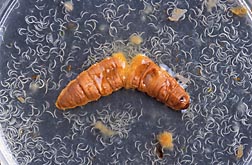 The pecan weevil is a major pecan pest in the Southeast as well as in Texas and Oklahoma, said David Shapiro-Ilan, an entomologist at the ARS Southeastern Fruit and Tree Nut Research Laboratory in Byron, Georgia.  If left uncontrolled, it can reduce crop production up to 70 percent.

An advantage of using beneficial nematodes is that they are safe for humans and the environment and target only specific insects, Shapiro-Ilan said.

In earlier research, Shapiro-Ilan and his colleagues discovered that pheromones produced by beneficial nematodes direct their behavior—telling them to disperse or infect insects. With that in mind, they sought ways to use pheromones to enhance nematodes’ behavior to kill more insect pests.

Since then, ARS has established a cooperative research agreement with Pheronym, an ag-biotech pest control company that develops and produces nematode pheromones that can be used to direct beneficial nematode behavior. Keep Reading

It is also featured at: